Dramatic Reconnection with My Guides

When my children reached their teens, I began to feel a build up of frustration at not having accomplished my spiritual work. One day in the middle of sorting out the washing in the kitchen, I said out loud with a powerful feeling of frustration, ‘I can’t believe you’re letting me waste my life like this!’ and I think it was this call out that changed everything. 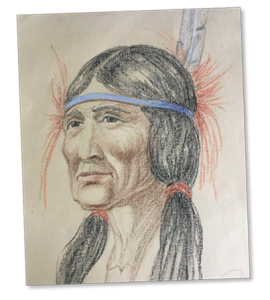 At the beginning of 2017, a short time after I blurted out my frustration, a friend booked a session for me with a medium. The medium told me that my relatives in spirit were very interested in what I was trying to do. This puzzled me because at the time, I wasn’t trying to do anything special. I thought that I might go back into practicing mediumship and maybe write a book or two, but I hadn’t taken any action so far. The medium told me that I was not alone because one of my grandmothers was with me and she was the grandmother who used to read tea leaves.

I felt this information was comforting and when I got home I checked with my dad. He said it was his grandmother who read the tea leaves and she also held secret séances. This led me to look out the spirit pictures that had been drawn for me in my twenties by Coral Polge, to see if I had a drawing of my grandmother. Amongst these pictures was the illustration of my Native American spirit guide. As I looked at the picture, I decided that it would be a good idea to do a meditation to contact him. I chose a guided meditation to meet my spirit guide from the internet. 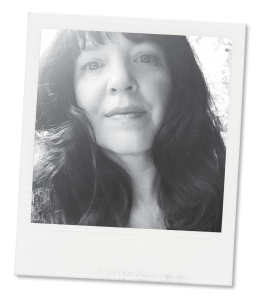 I played the meditation, which described walking along a woodland path – before the description of meeting the guide was even mentioned, I felt my Native American guide come powerfully into my body and aura! It was a fizzy feeling that seemed to expand my aura, and it was so powerful that it made my base chakra, an area that I wouldn’t usually be aware of, ache. It was a very physical experience.

I telepathically asked for the guide’s name and he told me that it was Red Rock. To make sure I had received the right name I said ‘Red Raven’ and he said again ‘Red Rock’. This was very exciting as I hadn’t been in contact with my guides for such a long time. So I reconnected with Red Rock a number of times that day to see if I could repeat the connection and I was really happy that I could.

As I thought about the name Red Rock, I remembered that over the years I had had many visions of myself walking on red coloured earth. These visions came with the feeling of wanting to visit this place with the red earth, but I didn’t know where it was in the world.

Looking on the internet later that day, I saw there were a number of places around Arizona called Red Rock that were connected to the Native American Indians. I felt my guide, Red Rock had instigated these visions. In fact, Red Rock told me his real name had been Running Stream in our previous life together, but he had adopted the name Red Rock to remind me of our connection to the Red Rock in Arizona.

The biggest change to my life began the night following my connection with Red Rock. As I was falling asleep, I was suddenly brought back to full consciousness by Red Rock touching my solar plexus in a powerful way. It wasn’t unpleasant, but it did make me take a sudden breath inwards. He then started to lift and then drop what felt like the energy body of my torso and this went on for a very long time. It felt like a fizzy feeling moving in and out of my torso and when I asked him telepathically what he was doing, he said he was loosening my etheric body. Every time he lifted my etheric body it made me take a sharp intake of breath.

The first night there seemed to be Red Rock and maybe one other spirit, although I wasn’t sure who the other spirit was. I could feel the familiar energy of Red Rock rather than see him and I got the impression that there was another spirit with him. The whole exercise went on until about 5.30 in the morning and when it finished I couldn’t get to sleep, but instead of feeling tired, I felt energised and wide awake.

During the following day I did many short meditations with Red Rock. As I work from home and my children were at school, I was able to do this, although it was very time consuming. During the meditations Red Rock spoke to me clearly, telepathically, telling me how to breathe in a more powerful way. He asked me to use my voice by humming and he told me to massage parts of my body, especially my heart area and my pelvis to get the energy moving. He told me this was ‘shamanic’, something I didn’t know much about. Some people believe that Native Americans don’t use the word shamanic, but this is the word Red Rock used when speaking to me, whether this is because he chose it for my understanding or not, I don’t know. It was not the sort of meditation I would want to do with anyone in the house as the breathing and humming were quite loud. While I found the whole process fascinating, I was surprised that it was all so physical. Up to that point, my mediumship had always been very visual and I had thought it was going to continue in that way.

Red Rock told me more about himself. He said he was a Navajo Indian, and that we had shared a life together as Navajo Indians. He told me my name had been Yellow Hawk and he showed me a picture of myself in my mind as a Navajo Indian. I was surprised that I looked very similar to the way I look in this lifetime, but I had slightly darker skin and brown eyes instead of blue eyes.

On the second night, Red Rock came to me again, touching my solar plexus. This time my room felt very crowded and I felt that there were a lot of different spirits present, each one taking a turn to lift and drop my etheric body. I didn’t see them, but I could feel their presence. I am quite a private person and I didn’t like the feeling of having so many spirits in my room and I didn’t like the feeling of them all having a go at loosening my etheric body. In the morning I told Red Rock that I didn’t like all of those different spirits working on my body and I asked him who they were. He told me they were my spirit team, but I’m glad to say that a similar situation has not happened again.

On the third night Red Rock came to me in a very real way. Although I had my eyes shut as I lay on the bed I must have been out of my body, as at one point I was standing up and I could see Red Rock very clearly, as though he had physically manifested. In his hands he was holding my cat. This was my cat, Leo, who had died a few months previously. At first I didn’t know what he was holding, but another part of me, like another body inside my body, bent forwards and kissed the cat before I realised that Red Rock was holding Leo. 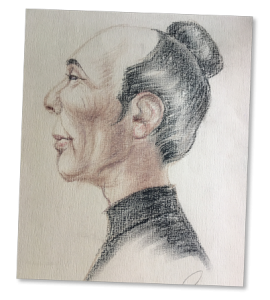 Red Rock then let the cat go and introduced me to another spirit guide called Chan who also looked just as physical. I recognised Chan because I have a drawing of him that was done by Coral Polge in my twenties. Chan told me that I needed to massage my abdomen, especially my caesarean scar. He explained that this part of my body was not receiving the flow of energy it needed. Chan said this part of my body wanted to join in, but the scar that ran through the skin had made the skin too tight and thick and the energy was blocked. He told me the scar needed to be loosened up and he showed me how to do this. Chan reassured me that I should not be afraid of my body and he exuded such a feeling of confidence that I found it inspiring.